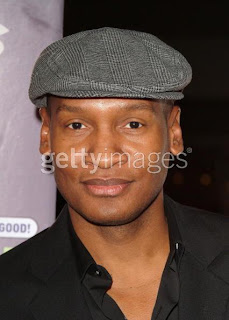 I’m just back from NYC. I did The Maury Show. Todd Newton was also on. It was fun. And of course now I wanna be the new Connie Chung. Maury is cute. My episode is about videos on YouTube. And you know how I feel about that. I mean apparently there is video of me trimming my nose hair while Janelle and Erika do their eyebrows. If you downloaded that you are sick. And if you watched? Twisted. Hey divas gotta groom. It’s all about maintenance. And I couldn’t kit out to have my girl Babette do it for me now could I?

I spent a bit of time in NYC. I still have many friends there. Crazy Makeba, my Kiki, Legs, Tom and E. And gosh I lived there on and off for years while playing model. I once loved the city. Not so much anymore. Once you live in Cali, it changes everything. Though NYC is cleaner than ever, it’s still dirty. And there are far too many people there. And the traffic is unlike anywhere else in the world. And if I saw one more girl in skinny jean shoved into high boot I swear I was gonna throw up! Everyone was doing it! Fat girls. Skinny girls! Short girls! Black girls. Asian girls. Rich girls. Poor girls. Hell even the Latin girls were doing it and it’s not sexy. Latin girls usually don’t follow a trend unless it’s sexy. I don’t think you are gonna see Giselle or Adriana looking like Peter Pan or Captain Jack Sparrow wearing stupid roll down boots with jeans tucked into them. All that’s missing is a hook and a parrot on your shoulder! Hold it. Let me amend that. On Giselle and Adriana it looks right. But anything looks right on them so…

It’s almost as bad as the Ugg epidemic that inexplicably has overtaken L.A. If I see one more short, fat girl wearing Uggs and a skirt I’m gonna hurl! Those are ugly, ugly boots. Who wants to look like a Yeti? Or worse, a hobbit? I don’t get that. And I get a lot.

My stay was kinda glam. Maury put me up at The Excelsior Hotel which is the cleanest hotel I’ve ever stayed in. And you know I’m a clean freak! I’m the guy that brings Lysol Disinfectant Spray and 91% Rubbing Alcohol to a hotel and cleans and sprays down every surface before I unpack. And I will leave a dirty hotel in a second. I think I was scarred by an episode of Date Line. Their hidden cameras took me a place I didn’t want to go! And when they broke out the black light? This brother almost fainted! Body fluids everywhere. And it wasn’t just cheap hotels either! Oh and when they did the “be careful where you buy your mattress epi!” I slept standing up for a week! They actually cut into mattresses and found that companies were just recovering old ones, found on the street, and selling them again. There was urine and blood and ticks and oh my… I digress. Anyway The Excelsior Hotel is lovely. It’s on the Upper West Side. 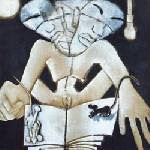 I stayed 2 extra days at The Hudson Hotel. It’s my fave NYC hotel. I love it. It has art work by Clemente, who is my fave artist. It’s a bit scene-y downstairs at night but I like that. I always walk through with my head down and sunglasses on and people think I’m Taye Diggs or Tyson Beckford or that gay guy from Survivor. Ha! Love it! The paparazzi tried to take my picture coming out of the Four Seasons but my friend Makeba was like, “No!” “I don’t want my picture taken!” “Where will it end up?” I was like, “Girl, I’m the (sorta) famous one here!” But by then some real famous person walked out and I was yesterday’s news.

So here’s Marcellas’ NYC trip in 4 days/3 nights:
Stay at The Hudson Hotel, 356 West 58th. Near Columbus Circle. In fact the C train stops right up the street. Definitely eat at The Hudson Cafeteria. There’s always cute boys there! I didn’t make it to Cafe Habana and to Cafe Gitane in Nolita. A boy can only eat so much. 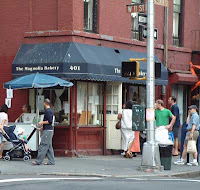 The Maury Show provided me with a car on taping day and I was sooo over the top. I went to Billy’s Bakery, 184 9th Ave, and got cupcakes and a piece of German chocolate cake. The train was around the corner and I hadn’t taken it yet. I had the driver drop me off at the subway and then pick me up at Columbus Circle to take me to the hotel. Chic! Crazy! Spoiled. Fantastic. Hey I tipped him well! The cupcakes were okay, the cake wasn’t. Magnolia Bakery, 401 Bleecker St., is still the gold standard. It’s better than Billy’s.

Dinner at Crema Restaurante, 111 W. 17th at 6th. It’s high concept Mexican food. Gorgeous room and good food. The service isn’t good but that could just be who we got that evening. While having dinner with Tom, his beau and my new friend, Danielle, someone whipped out their camera phone and took my photo without asking. I started to pull a Naomi and snatch that damn phone from his hands and throttle him with it. Did you see when Naomi went berserk on that passenger who took her pic on a plane to South Africa? I’m sure you can find that on YouTube. And that is what is wrong with YouTube. 5 years later and you can still find a bad moment that Naomi had. Or me grooming. Or dancing in the shower.

Cocktails at the Ritz and the Four Seasons. I’m very that way. I like low-key places to start or end a night out. Ease your way in… And the Ritz has this nut platter that is crazy good. Yum.

I’ll spare you the gay bars. They are all the same. Plus I’m seeing someone so…

My boy calls me his “Cocoa Bear.” That’s so cute. I am cocoa. The color anyway. My skin is magnificent lately. Like a Godiva milk chocolate truffle. Wait a second… Bear? Bear. Does that mean I’m fat? Or hairy? Bwah!! My boyfriend thinks I’m fat! It’s like that scene when Kate Hudson starts crying in How To Lose A Guy In 10 Days. Gosh I guess it’s time for the Master Cleanse again. This is day 2. I’ve already lost 2 lbs. The last time I did it I lost 14 lbs in 7 days. I had to stop early (I was going 10 days) because I literally dropped 4 lbs in a day. It was a bit scary but I got to pull out the Prada so it was worth it. As Oprah says, “Nothing tastes as good as thin!” But after losing 18 lbs this summer during All-Stars on slop I have to disagree with O. A fucking In-And-Out Double Triple, animal-style, tastes pretty damn near heaven. And yeah that’s double meat, triple cheese baby.

And that’s a wrap. Hm mm… Always business doing pleasure with you. No, that’s Dylan. Hm mm… Reynolds out! No. I’m too tall for that one… Wow. I gotta come up with an out line! Stay chic. No… Too girly… Tell one of those bitches… No that was funny but sounds like a t-shirt.

Ooh I got it: Work your show. I like it.

2 Replies to “Maury, NYC, The Skin & The Master Cleanse! Randomness 8…”