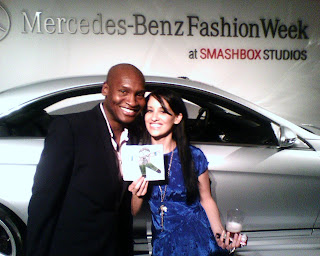 So I’ve been doing the L.A. Fashion Week thing. It’s been kinda crazy. Diane and I went to 2 shows yesterday; Oligo Tissew and Kevan Hall. Oligo was… Well if you can’t say anything nice. Wait, when I was little my mom bumped into a friend on the street who’d just given birth. That baby was ugly. I’d never seen an ugly baby before. I recoiled. My mother who was desperate to say something, anything nice said, “Ooooh that’s a pretty blanket.” “Where did you get that blanket?” So I’ll say this about Tissew, “Ooh that girl in the front row next to Paula Abdul is so pretty.” “Who is she?” Hayden Panettiere. 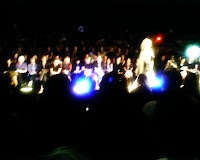 Kevan Hall was gorgeous. And in the strangest twist of fate Diane and I did not get front row. We got seats in the back. 3rd row. You gonna tell me we aren’t more relevant than… No. I won’t play that game. It is what it is. That’s that bullshit fame stuff that does numbers on your head. That’s okay. We got pictures taken and did a few interviews. And my Diane looked gorgeous. She rocked a vintage 80’s party dress and gave you Dynasty all over the place. A modern Sammy Jo!

After that it was off to Boulevard 3 with the peeps from J. Lindeberg for the Fashion TV, Bleu Model Management, and Alex Quinn hosted, “Pinque Cirque” party and show. I got drunk. Hammered actually. Snookered. Which for me means I had 2 cocktails. Okay I wasn’t drunk. But it sounds good. Diane and I had a blast. We also bumped into Howie. People think Howie and I still have beef. Some fans saw Diane and I walk in and then speak to Howie and thought we’d come to blows. All-Stars is over people. There’s nothing to see here. Move along. We have.

The Boulevard 3 party was like reality hell. I mean there were more reality stars in one place than a reality convention. I generally like my fellow d-listers. And I was so excited to meet Michelle from ANTM. She was so sweet and excited to meet me. At first I didn’t know who she was. She was just this tall, thin, gorgeous girl screaming my name. And then I recognized her and we were 2 idiots jumping up and down screaming each others names! It was cute. Jerri Manthey who is one of my faves was there. And the cute girl from Survivor whose brother was on Project Runway. And Ryan and Burton from Survivor (both of whom I wanna sleep with). I’m just saying… Oh and ton of Top Model alums who are like cockroaches. I mean they were everywhere. You can’t swing a stick in L.A. without hitting a reality star. But don’t try that. You might hit me.

Once again I rolled in at 3 a.m. This is really getting quite ridiculous. Tonight I have one more show and that is it. Oh and one more party. But that’s it I swear.

Next week I shoot my 1st epi of my new gig. Once it’s in the can I’ll tell y’all about it. And I’ll even give ya pics. It’s good. I promise.

I gotta do a facial. And an under-eye treatment. Drinking, smoking and hanging with models is not good for the skin.