Yesterday was my first day at L.A. Fashion Week Fall 2007. I only went to see one show and ended up spending the entire day there. Front row at every show. The weird thing about L.A. Fashion Week is no real celebs actually attend. Yeah you get the stray Eva Longoria sighting but you are lucky if you get JC Chasez or Paris Hilton or Tara Reid. Sorry. Not really A-listers.

And you get the wacky Janice Dickinson… More on that later. 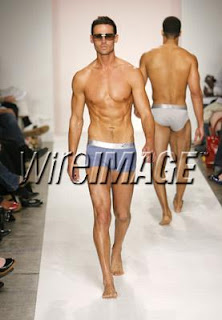 So first I saw 2(x)ist underwear. Boys in the they knickers! I’m all in. It was a hot show. Though it started with a marching band. And they were not cute and not in their underwear. Then it was a high-school dance troupe. Couldn’t dance. You know how the girls sorta have the moves but not really. Like they learned them from an Eric Nies hosted “Learn To Move” video from MTV. And then there was the Laker girls. Again not really dancers. And they wore hose with their shorts. Granny.

And then boys in their naughties! The show was hot. And JP Calderon from “Survivor” was in it. He looked amazing. But the star was the hot blond with the big ass! His tighties could barely contain that thing. It was perfect and flawless. Brothers must love him! That ass was like sunshine. Spectacular! 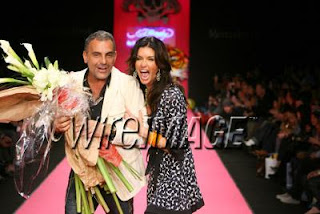 The next show was one of the big shows of the week, Ed Hardy. I love Christian Audigier. He’s a great, fun guy and has been so sweet to me for years. His show was just what you expect from Ed Hardy; not ground breaking but cute stuff. All styled with a circus theme. But here’s where things go awry: Christian comes out for his bow with porn superstar and very nice girl, Jenna Jameson. He gets to the end of the runway and all of a sudden Janice Dickinson, who has been whooping and hollering the entire show jumps up on Christian, knocking Jenna, who is in easily 5 inch stilettos out of the way! During the finale! And Jenna is just stunned and not knowing what the heck to do leaves the runway! It was crazy! I talked to Jenna after and we were both like, “What the hell was that?!!” And Jenna goes, “Yeah she stole my moment.” BTW Jenna is tiny and she is gorgeous and her haircut is crazy! The hottest bob. And she is sooo sweet. I can’t say enough nice things about her.

So I won’t bore you with every show. I saw Tart. Cute. The best show I saw that day. It was a little reminiscent of Multiples, from back in the day. Or Units. Y’all remember that? It was jersey and you could wear the skirt as a headband or bandeau or belt. 4 colors a season! When I worked in retail in high school the Express girls would make fun of the multiples girls. God I was a queen even high school. But I was senior homecoming king. Damn it…

Last night I ended up going with my publicists to the 2 Be Free show. I have to be honest, 2 Be Free makes me ill. It reminds me of last summer. Janelle wore it all the time. It gets on my nerves in the same way Juicy Couture does. All that tacky writing all over the place. And it’s nothing more than sweats. Really expensive sweats that have made 4 uninspired designers very wealthy. Literally those are the kinda clothes you look @ and go, “I could have done this!” And when you see girls in it, who have never gone to the gym a day in their life with Juicy written across their ass? I always think, “Sucker!” “How much did you pay for that?” I also think, “Ugh.” “Who wants a juicy ass?” I’m just saying…

Of course I get there to do the red carpet and I’m behind Paris Hilton and the lovely (Um mm… No.) Tara Reid. At least she was dressed appropriately. She was on the carpet with one of the designers who is actually very hot. Hot in that faux L.A. hipster, grunge, scruffy, skinny jean, kinda big ass, washed out blacks, “I just rolled out of bed”, slightly Brandon Davis oily, I’m wearing Costume National from Barney’s shoes, kinda way. I’d have done him. So I had to wait till those two wonderful children of God did their thing and then 2 absolute hos cut the line! And me and the paprazzi was like, “Who you?” Just because you were invited doesn’t mean you get to have a moment in front of the cameras. And these were skanks. I didn’t want to walk where they strolled. Not without Lysol. Note to self: Bring Lysol and Purell with you to events. Publicist can keep in purse…

Once inside, my adorable love Diane was there! Love. Love. Love. Always so excited to see her. I almost cried when I did. She is one of those people to me that make the world a better place because she exists. So Diane and I go to the show which ended up being a good. Paris was in it. She opened and closed it. Tara Reid, Robby Williams (out of rehab and taller than I thought he would be), Bobby Trendy (a nightmare in the same crazy tulle sparkle outfit he wears everywhere) and Jenna Jameson were there. And oh my gosh, Hayden Panettiere was there. Across from Diane and I in the front row drinking a Tab. And then a rap song by Dr. Dre came on and she was puttin ’em up! Like they do in rap videos! Now I love her even more.

I didn’t get home til 3. After Boulevard 3 we ended up @ Social and after that Teddy’s for the Imitation Of Christ fashion show after party. I’m kinda show’d out. I’m not going to any today. But I will see Oligo Tissew and Kevan Hall on Thursday.

Oh and I met a guy. African. And hot as hell. Really extraordinary. Sexy. Smelled really good. I know that because he got a little too close at Boulevard 3.