All The News That’s Fit To Blog: 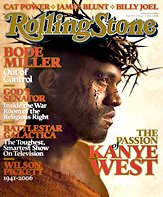 1st: What the hell is Kanye thinking? In this interview he compares himself to Christ! Okay maybe not but it sounds inflammatory. Now I did agree with him that “The Bush” doesn’t care about Black people but c’mon!

Sometimes I think famous people should just shut up and be famous. This is one of those times.

I ain’t sayin’ he a gold diggah…

2nd: My roommate just sent me a great article from Salon.com about Mike Jeffries, the CEO of Abercrombie. I think A&F is a destructive force in the world. Talk about people not caring about Black people… And don’t get me started on Bruce Weber. Don’t worry there is justice. Take a gander at the pic of Mr Jeffries. That’s what most of those Abercrombie boys look like when they ain’t boys no more. Ouch.

3rd: I just woke up. I haven’t shaved in 2 weeks. I look like a yeti. My agent just called to tell me I have an audition and if I can do a British accent? Um mm…I think so…How does that differ from affected gay guy? Who am I? Naomi Campbell?

Yes, I always look for an excuse to put in a photo of Naomi. What else am I but consistent… 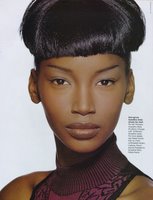 And last but by no means least one of my fave models from back in the day has fallen on hard times. Or is about to do hard time. Beverly Peele has been arrested. I guess the rumors are true. Back in the day a model, who shall remain nameless as I can’t afford a defamation of character lawsuit, was released from a Les Copains show in Milan for going through the purses of other models… (I only always took the clothes I wore. But they were fitted for me and I wore them 1st!) The same model was not too long ago let go from her agency because she stole the wallet of another model @ a hair salon where the former was getting her mane done gratis. She went directly to Ralph’s and purchased groceries. The check out girl was quoted as saying, “I thought that was HER. Wow, she’s put on some weight.”

But for the grace of God there go I.

Wish me luck @ my audition as I get all Naomi on ’em!

3 Replies to “Kanye, Abercrombie, Naomi and Beverly. Or just another blog entry.”